Sunday 1st May saw an epic day of poker action at the Malta Poker Festival Grand Event as 273 became just 18 after a mammoth day of play here at the Portomaso Casino.

A strong cohort of 73 PokerDeals patched players competing in the PokerDeals Last Longer made it to Day 2. These have surprisingly been cut down to just two players standing, vying for who will win the free ticket to the next Malta Poker Festival Grand Event: Robert Lim & Federico Pizzazz They are also of course, more importantly, competing for some serious payouts, at the top of the pile is the glory prize itself, 1st place, rewarding €71,000 and of course, the Malta Poker Festival trophy!

Pawel Zawadowicz is the man to catch right now, leading by over 2 million chips with his stack of 7,820,000 in chips.

Let’s check in on how our PokerDeals Last Longer players and others were doing in the late-night action.

We dropped in on the final six tables as they were rapidly slashed back to just three, across the late hours of Day 2, and it didn’t take long for us to witness some serious brutality. In fact we counted at least 17 eliminations across less than 90 minutes of play, in the final field of 45 players. That’s pretty rapid, even for a Texas Hold’em tournament.

Some of these spots were simply unavoidable of course, just your classic coolers. For a case in point we could look at the elimination of Cosimo de Gennaro at the hands of Jasper Van Moorsel. A simple matter of TT running into AA preflop, Big Blind vs. Button. Nothing to be done about it, and when the board ran out 9♠8♥3♥ 7♠ K♦ there was no shame in this Italian’s walk from the arena. 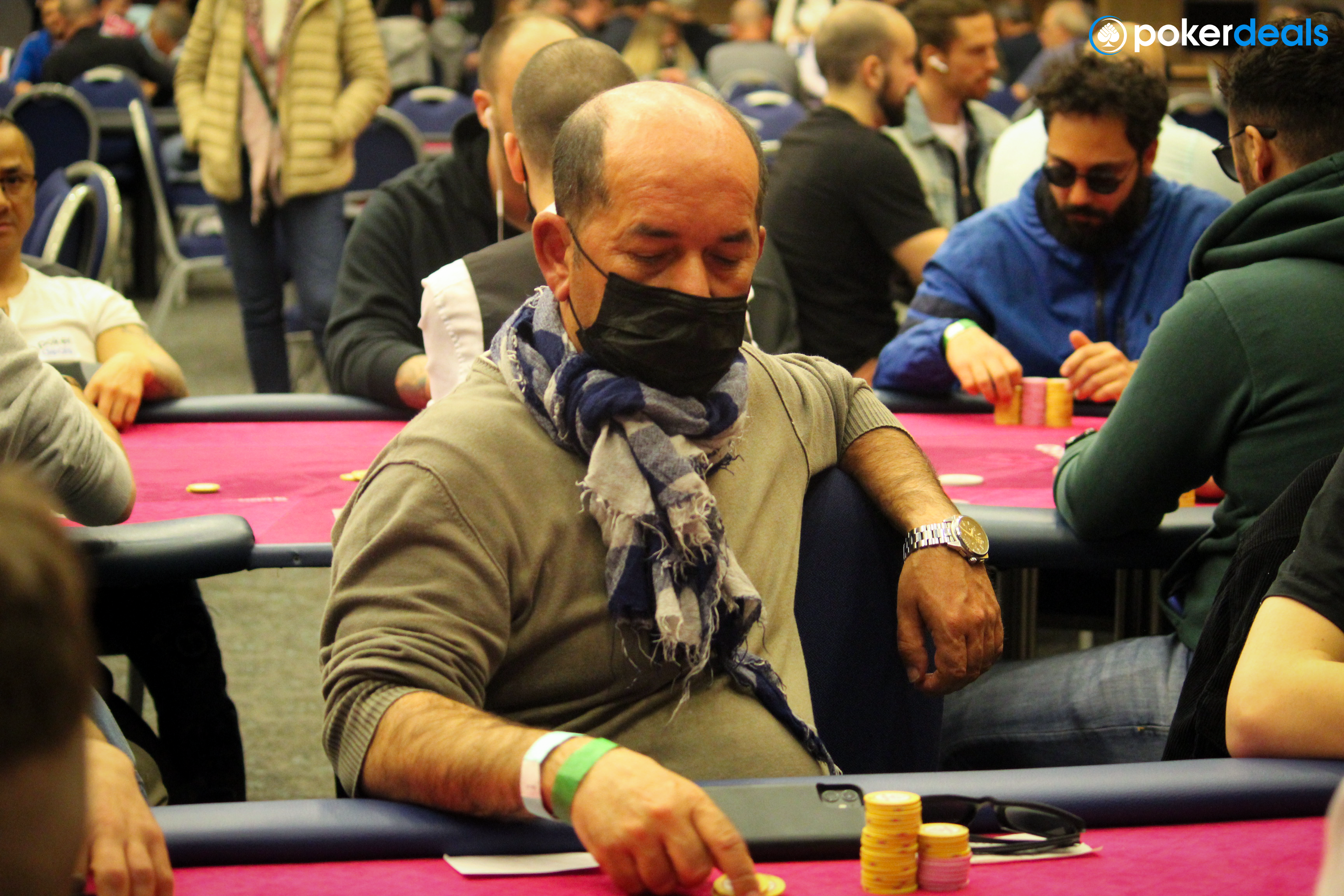 Another all-in hand we bore witness to featured the Daniel Lakerveid being despatched by PokerDeals Last Longer competitor Federico Cirillo, when Lakerveid’s BB hand K♥6♥ failed to get there all-in against Cirillo's K♠J♣ from the Button. 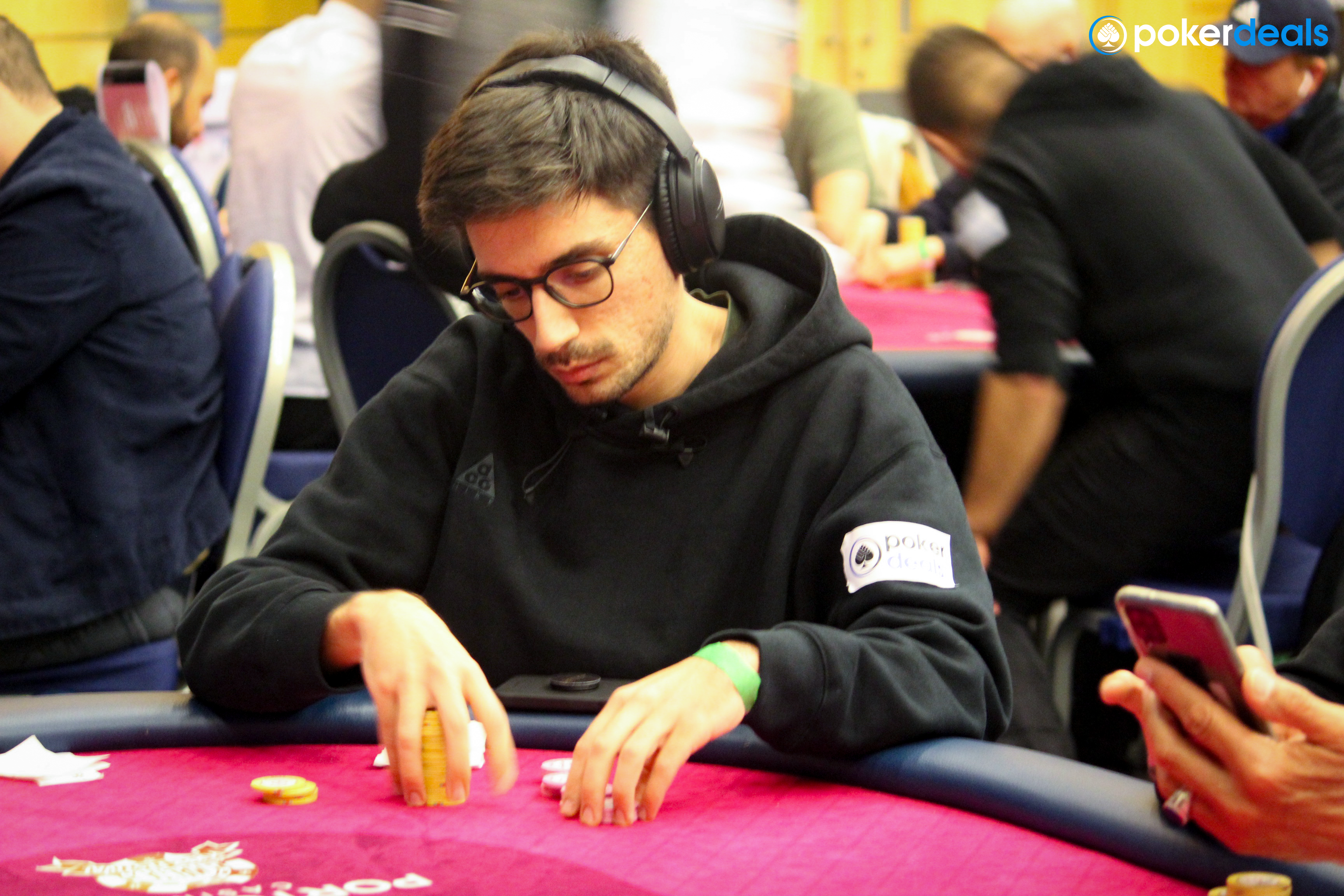 Another all-in shove from a short stack was Nicolaj D’Antoni’s K♦7♦ getting it in against the A♠4♠ of the seemingly indestructible Pawel Zawadowicz, the board running out a hopeless 9♣J♥Q♥ 6♦ 9♥ to secure Zawadowicz the win with just Ace high. 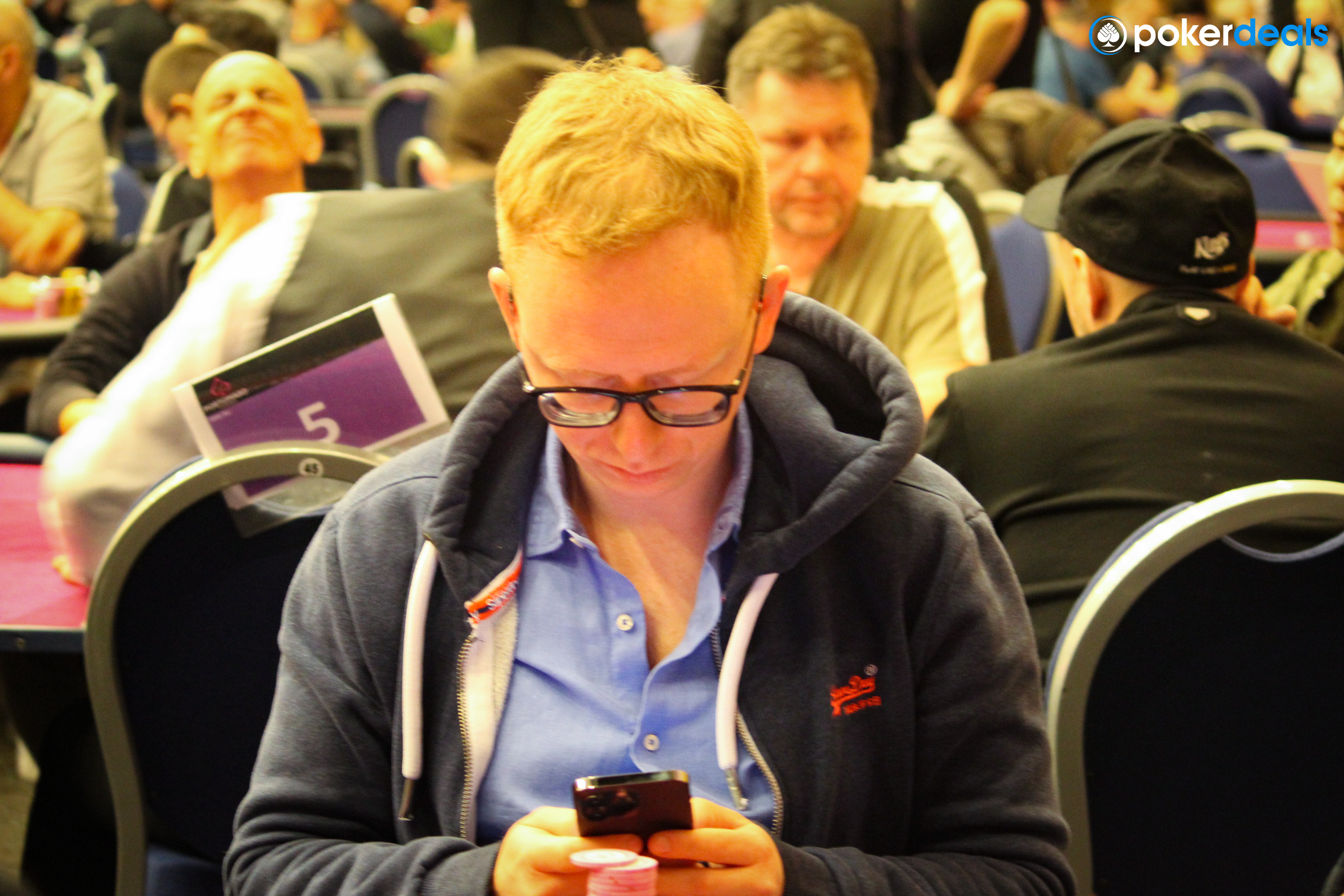 But there was worse to come, at least for PokerDeals patched player Paul Morris, who had the spot players live (and die) for, A♥A♣ in the Big Blind facing action when short-stacked. Who knows, he might have flatted against one, but when Jordan Dumas opens Cutoff and James Clarke decides to come along from the Small Blind, and you’re sitting on well under 15bbs, a jam seems very acceptable, and that’s just what Morris did. 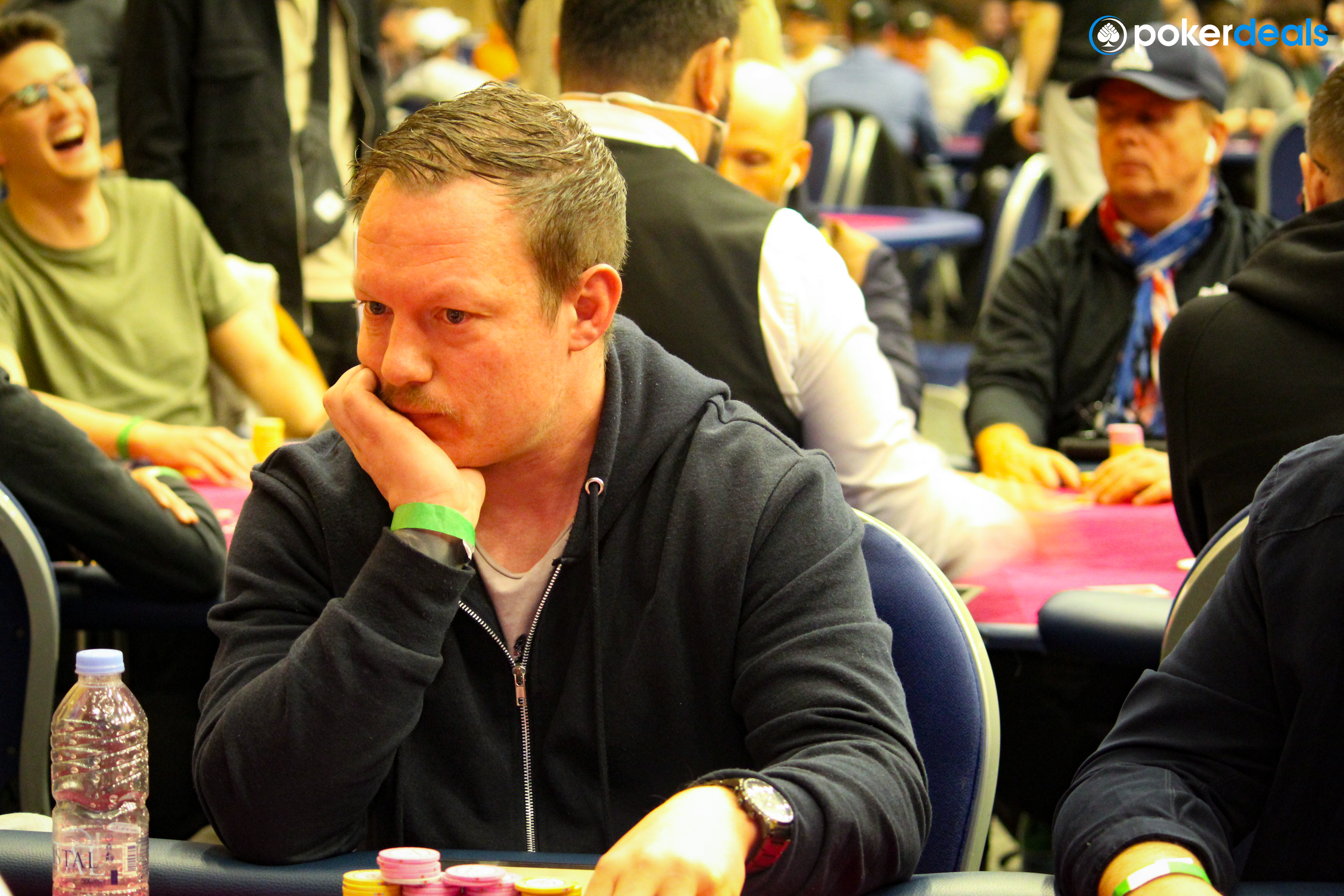 After consideration Dumas decided to stick around with Q♣J♣, Clarke got out the way and the flop thundered down around Morris’ head, 8♥J♠J♦. The turn and river had nothing more to offer Morris as they fell an irrelevant 5 and 7 of ♠s. It’s rough when you’ve grinded for days to get there, but it’s all part of this game we love, and this is why we are in it for the long run!

One other hand of note came from canny players Jason Shellum and Mantas Petrauskas as they negotiated a 3♥4♣6♠ 3♦ Q♦ board. Petrauskas had bet all the way, and he didn’t let up on the river, putting Shellum to a major question with his river bet of 600k. Shellum went deep into the tank. He was down there a while, he may have had an oxygen mask on.

Eventually someone at the table called time on Shellum, and it was during that final minute of decision-making that he found the call, with, wait for it… AJ offsuit. And he was good, Petrauskas quickly mucking. “A hero call!” someone nearby remarked to him. “A hero read!” was his quick reply.

We literally couldn’t be more excited for Day 3, the final day of this Grand Event today kicking off at 2pm, and a fascinating end to this highly competitive Grand Event.

We’ll have more coverage of the day coming out this evening on our PokerDeals Live Reporting page. Also if you’d like to see even more videos, photos and social interaction covering the event, please do join us on our PokerDeals Facebook Page!

Simoes has done it, closing out an immense run to top a field of 1,073 runners and taking down the prestigious €5,300 EPT Monte Carlo Main Event ! In doing so he also becomes the first Brazilian to ever ship an EPT Main , winning the trophy along with a sick €939,840 in prize money. Marcelo Simoes is a big player in Brazil, where his previous best score was $109k for 1st in a $900 BSOP Main Event back in 2017. With this result being almost 10x bigger, he must be walking on air after his trip to Monaco. The Brazilian player was the only representative of South America featured on the Final Table, busting out players from across Europe and the United States to secure the win, including Spanish PokerStars Pro Ramon Colillas . During six-handed play Simoes really shone, building a huge chip lead thanks to consistently aggressive play. Across a hectic half hour's play, German Erkan Soenmez , French Hugo Pingray , US player Jaime Cervantes and Dragos Trofimov from Moldova were all eliminated, leaving just Simoes and Danish player Morten Hvam to fight it out heads-up. The heads-up itself was also a short one, lasting under an hour. In the final hand Hvam opened to 500k at 125k/250k (250k bb ante) blinds and faced a 3bet from Simoes to 1.3 million which he called. The flop came down 9 ♦ 7 ♦ 6♠ and Simoes continuation bet a further 1 million . Hvam considered briefly before shoving all-in, a total of 3.4 million chips, with Simoes snap-calling him. Simoes tabled K ♥ K ♦ for the overpair, and all Hvam had to show was the K♣T ♦ for a gutshot with overs. When the board ran out 5♠, J ♦ the Dane was eliminated, and Simoes crowned EPT Monte Carlo Main Event Champion for 2022. It had been a long, hard battle for the Brazilian over five days of intense poker action, and a well-deserved win for this passionate poker player. We are sure that his family and friends back home will be celebrating his win for Brazil for a long time to come. Well played sir. by Lucky Luke Image courtesy of Pokerstars