Should You Go Mobile With WePoker?

WePoker is a lesser-known app amongst the mobile poker offerings out there, and as such the games there are exceptionally soft. Nevertheless, let's take a closer look at the app and find out more in our WePoker review. 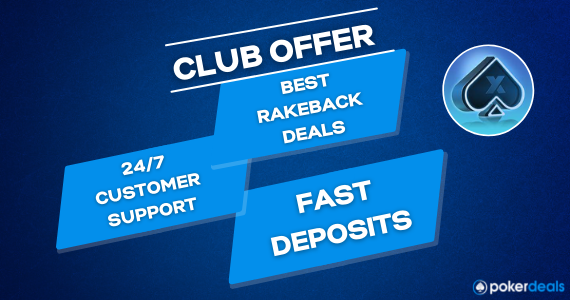 The WePoker app provides the capacity for private club games to be run, the same model as with numerous other mobile poker apps. Since the site is somewhat newer and less well-known to regulars there are fewer clubs but also much softer games available.

PokerDeals has all the latest on the action at WePoker and we are ready to help you get on your way to playing in those games.

Simply drop us a message if you’d like to find out the best way to get in the games on WePoker and PokerDeals stand ready to help.

What games are available on WePoker?

WePoker ring game action is available for both No Limit Hold’em and Pot-Limit Omaha, and they also offer Short Deck games in some clubs. SNGs are also available.

What promotions are available at WePoker?

At PokerDeals we are always on the lookout for any deals, promotions or special bonuses on WePoker and all the other great poker apps.

Can I see my opponents’ statistics on WePoker?

WePoker itself does reveal some fundamental data on each player at your table, such as how often they voluntarily enter a pot. Such data can be quite useful in identifying soft spots at the table, but third-party tracking software is not officially permitted.

How do I get access to the best WePoker ring game action?

We have the latest info on this and all other club-based apps, so please do get in touch with us at PokerDeals to get started on your grind at WePoker!

Emulators do function for this app, if you’d rather play on a PC, but do note that this form of play is not officially supported.

Does WePoker offer any promotions or bonuses?

If ever a special promotion or offer appears on WePoker or via one of the WePoker clubs, we will be sure to know about it here at PokerDeals, and to let you know about it of course!

How is the user interface of WePoker’s mobile app?

WePoker is designed to be a mobile site for use on the go and is frequented by some very recreational players. The site operates in portrait mode like most of its competitors, and is user-friendly, regularly updated, and pretty stable to play from. It is best suited to playing one table at a time.

The lobby is easy to view and filter, you can sit games immediately or join a waitlist, and of course, the usual features found on a modern poker app are present - such as a four-colour deck and customizable tables.

How are the different poker clubs on WePoker?

The clubs for WePoker are fairly few, and as such, it is easy to get positioned in the very best of them and to find the best action available for whatever you want to play. We’re ready to help you hop in those games today! Get in touch on any of our social media platforms including Facebook, Twitter and Instagram.

How can I find out more about WePoker?

If you’re ready to get started on WePoker, all you have to do is drop us a contact here at PokerDeals and we’ll get you set up for the best start on this site. The games are waiting for you so why not hop in today?