Why Should You Play Poker at Unibet?

Unibet is full of casual poker players and is decidedly softer than most traditional poker rooms. With sufficient traffic to keep the cash games rolling around the clock and a nice design, this is a site worth adding to your line-up. Let's tackle what there is to know about their poker room in our Unibet poker review. 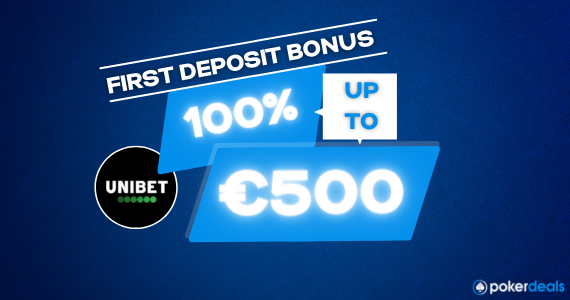 Unibet is well-known as one of the most newbie-friendly poker sites out there, having made a number of steps recently to limit regulars at the games including allowing continual screen name changes for their players!

Boasting an established bookmaker, Unibet pulls some decent cash game traffic, and they also offer a range of satellites to their live events which take place around Europe.

We're here at PokerDeals to get you set up with the best possible start at Unibet.

How do I sign up to Unibet and get the best starting bonus?

Signing up as a new player takes just a few moments, simply follow the steps below.

What games are available on Unibet?

Unibet spread mostly No Limit Hold’em and Pot-Limit Omaha, with cash games running up to $2/$4 USD. The PLO games in particular are very popular, with several running at once in these stakes. There is also a short-stack 10bb deep version of NLHE called Banzai Texas, where the rake is just 1%.

Unibet does run SNGs although these are not particularly huge volume-wise, and a decent MTT schedule with lower guarantees, as well as satellites to their live events.

Finally, there is a format on Unibet called Hexapro, which is essentially their version of Spins. The difference with Hexapro is that if you do spin up a bigger jackpot guarantee, the blinds are extended, making it play rather deeper and more strategically, which can only be to the good when playing for a much bigger prize pool.

What promotions are available on Unibet?

Unibet has excellent promotions for new players including both a €20 free money bonus immediately deposited into a player’s account and a €200 playthrough bonus which is also easily cleared in play at the tables.

Unibet also has a very unusual rakeback system, but one that is pretty good for all players, especially lower stakes players. This is essentially structured around challenges and missions which are given out to players in order to achieve player points which can be cashed in for real money later on.

What is the rake on Unibet?

Unibet is so newbie-friendly that it actually does the opposite of most poker sites, and sets its lowest rake for the lowest stakes, with rake set to just 1% for NL4, and 3% for NL10. It does rise up to 6% for the highest stakes running, however, but with a permanent €3 cap up to the highest stakes.

Can I play on Unibet from my country?

Unibet accepts most countries in the world, other than the following:

What deposit and withdrawal options are available?

Unibet has a plentiful selection of deposit and withdrawal options including VISA, Mastercard, Skrill, Paypal, and Paysafecard.

Unibet’s poker client for PC is very unique, and well-designed. Custom avatars have a 3D effect which is quite unusual, and tables are customizable in a range of ways. The lobby is very clearly laid out, with all games readily accessible in a few clicks.

The Unibet management have taken a number of key decisions with their poker client in order to protect casual players and keep their poker ecosystem healthy and relatively fun, soft and reg-free. One of these measures is to ban not only HUDs but all third party software.

Another fairly unique option, rather than making play fully anonymous, is that Unibet has decided to allow every player to change their screen name up to 3 times per day, which has the same ultimate result, keeping players effectively unknown to one another. It is also not permitted to observe a table before joining the game. Even auto-rebuy is not permitted, which might seem odd but again is in this same casual-player supportive business policy. 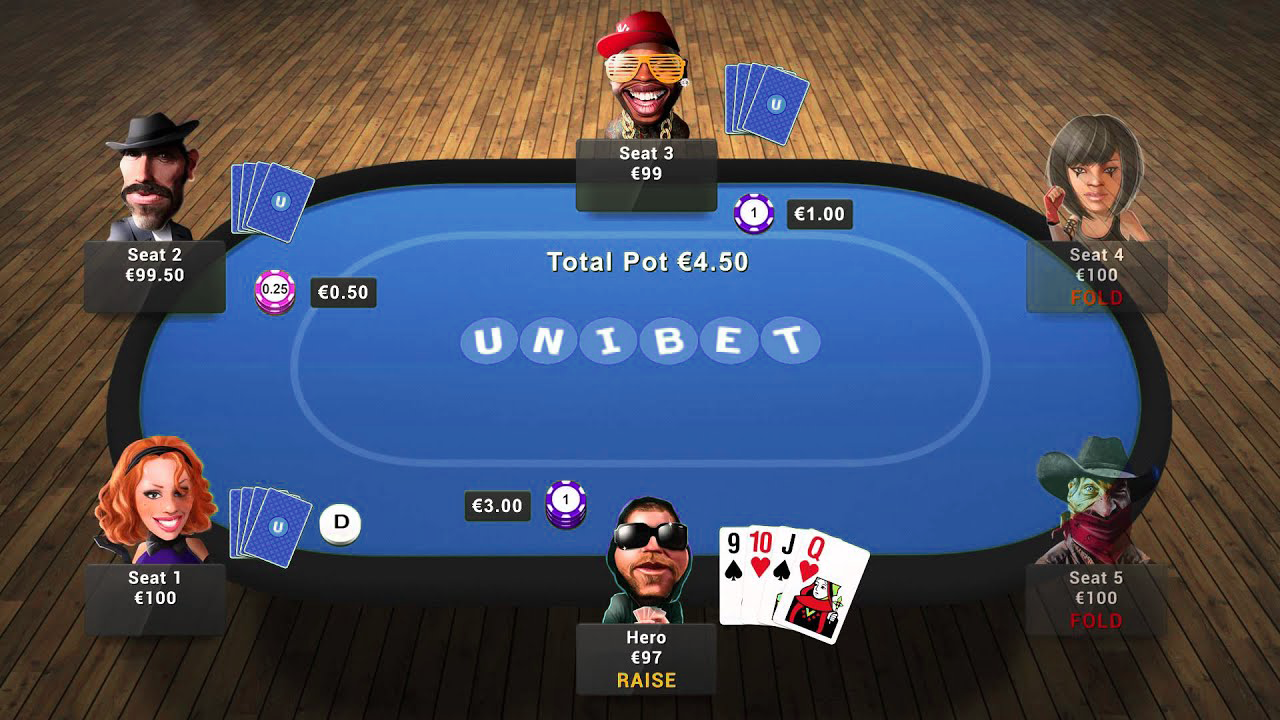 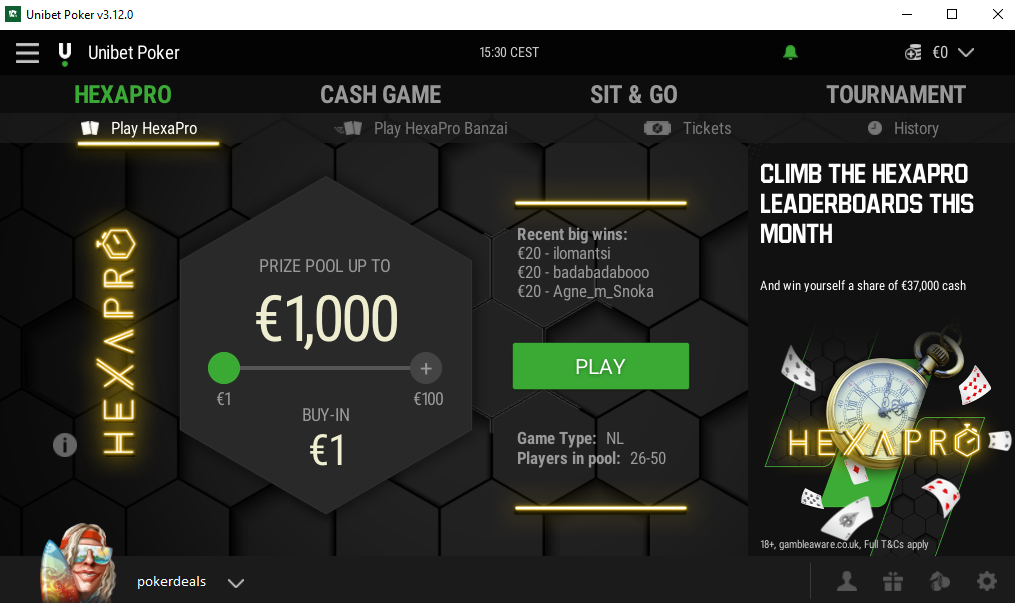 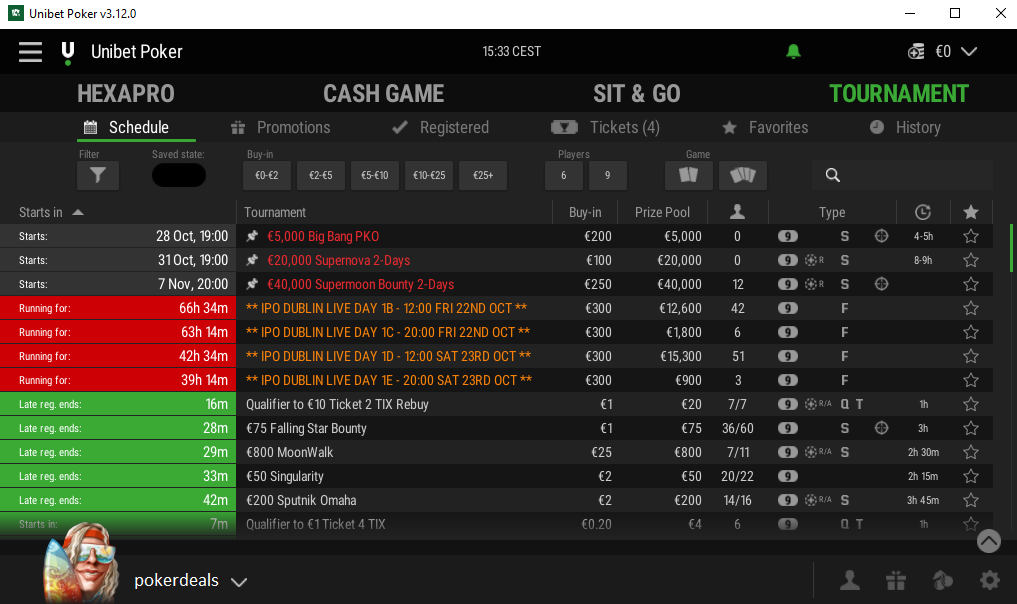 Can you play Unibet on iOS and Android?

You can indeed play on Unibet via mobile, with their dedicated mobile app for smartphones. This app is very similar in layout to the PC version, and has the same fine features and user-friendly navigation. The Unibet poker app is available for both Android and iOS operating systems.

What is it like to grind multiple poker tables on Unibet?

Multi-tabling works just fine on Unibet, but there is a table cap of eight tables at any one time, and four tables at once if playing NL4. That keeps the action a little bit softer, which is great.

How is the traffic on Unibet?

Traffic is not what you come to Unibet for, but that said the traffic is pretty solid in cash games regardless. More importantly, the action is great.

Unibet hosts some nice €1k - €2k events around Europe, but when it comes to their online events the buy-ins tend to be a little more modest. Once again the player pools are full of casual players so the value is certainly there.

Which sponsored pros play for Unibet?

Unibet has a number of ambassadors, the most well-known of whom is probably Irishman David Lappin, whose best result so far came when he chopped the Full Tilt Espana Barcelona Event for €81,000.

Can you use a poker HUD on Unibet?

All HUDs and indeed all third party software are strictly banned on Unibet, keeping the games really good.

Are my funds safe on Unibet?

Unibet is fully licensed and a well-established player in a well-regulated industry. Moreover, they’ve gone beyond this with a voluntary registration with organizations promoting corporate responsibility in gambling such as the RGA. They were named Socially Responsible Operator of the year back in 2016 by the IGA.

What is the minimum deposit on Unibet?

The minimum deposit on Unibet is €30.

What else do I need to know about Unibet?

Unibet has a pretty huge and popular casino as well as a long-running sportsbook, which keeps the action in their poker client really nice and soft, and you often see some pretty huge pots at their cash tables, which is really where the heart of the action is at this site.

Sign up today to get started, and good luck at the felt!