What a tournament, and what a winner! Espen Jørstad has claimed the most coveted title in poker, the WSOP Main Event, walking away with $10,000,000 and the gold bracelet to rule them all. Jørstad ploughed through a huge field of 8,663 players for the ultimate championship title after a gruelling 9 days of play. He is the first Norwegian ever to win the Main Event title.

How the final day of play went down 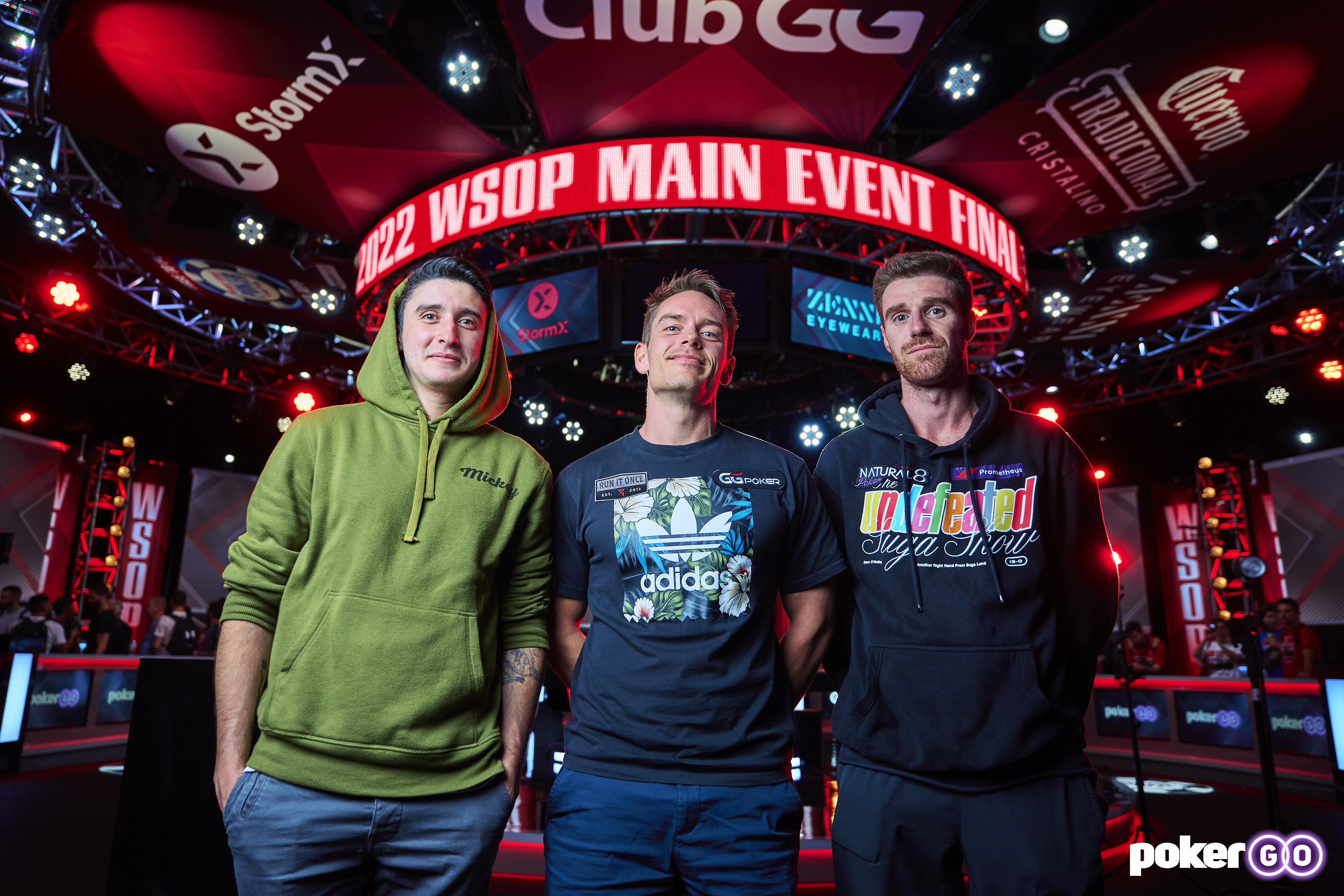 On the tenth hand of the day, Attenborough went up against Duek in what would be the latter's final hand of the tournament. With blinds on 1.5M/3M,  Attenborough found A♣J♣ on the dealer button and raised to 6m. Duek on the small blind looked down at K♥8♦ and re-popped to 23M. Jørstad folded his K8o from the big blind and Attenborough called. Both players checked the Q♦5♥10♣ flop, only to see the party card K♠ on the turn. Duek bet 17M and Attenborough smooth called. The uneventful 3♠ river saw Duek all but shove his stack, leaving himself with a 5M chip behind to which Attenborough announced all in. Duek tossed in his final chip to be beaten by broadway and left the tournament in third with $4,000,000. 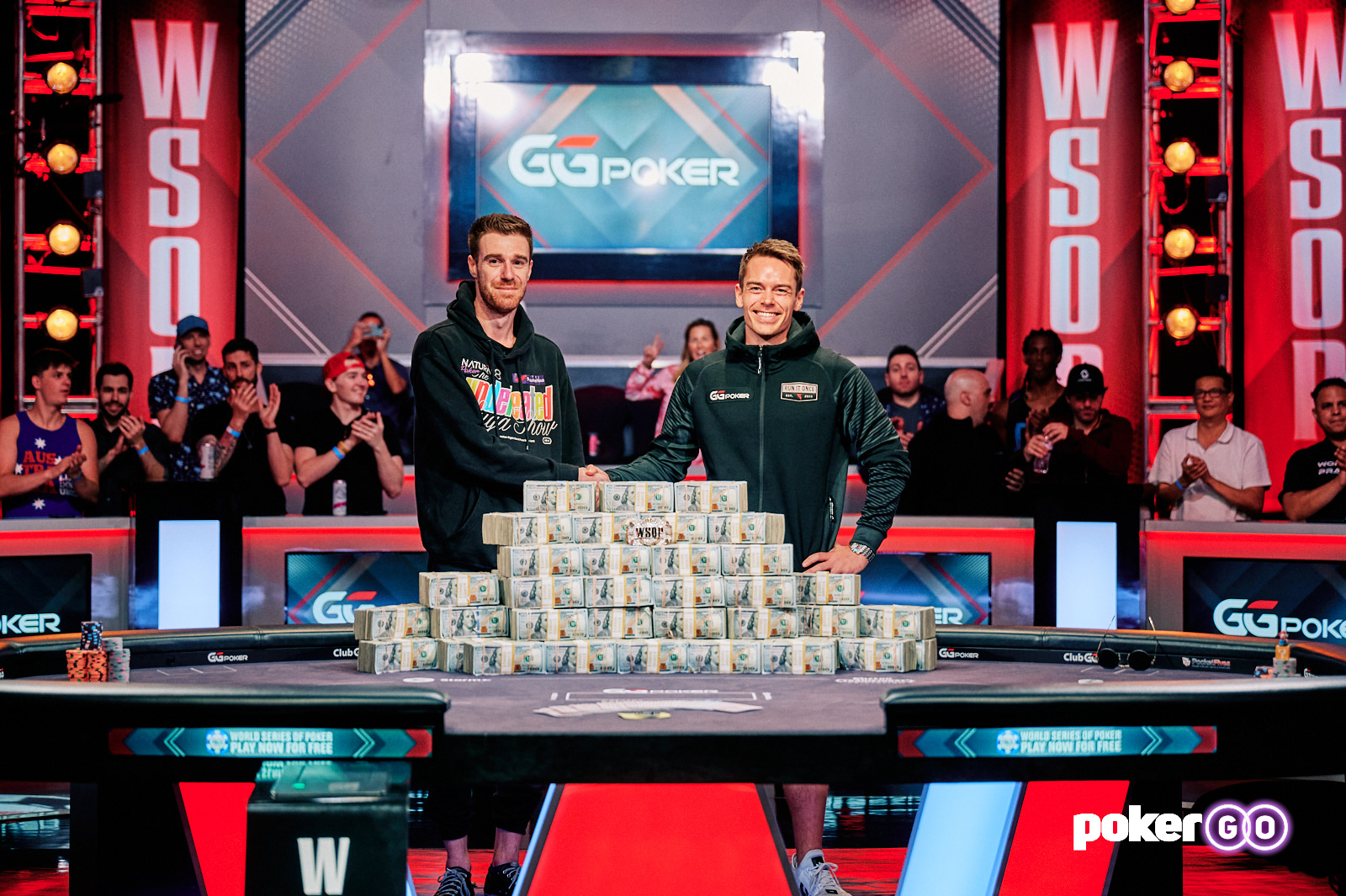 The intense heads-up duel began with a hand that lasted almost 30 minutes, Attenborough tanking for his tournament life with bottom pair. He eventually found the fold, but lost over half his stack in the process. The final hand of the tournament saw a similar tank from Attenborough, but this time, he couldn't find a fold.

A formidable opponent, Jørstad happily accepted his bracelet and his monster first prize of $10,000,000.

Having played most of the tournament barefoot and finding his 'chill' every time he was faced with an important decision, Espen Jørstad was the picture of level-headed throughout the WSOP Main Event.

Primarily a cash player, Jørstad dabbles in tournaments every now and again, and he is quite well known online as Hymn2ninkasi on PokerStars, and COVFEFE-19 on GGPoker. He won his seat to the Main Event online at GGPoker in a $1,050 satellite and will continue onto the WSOP Europe Main Event after securing a seat simply by making the final table.

He has mentioned that with his winnings, he's excited to start playing in more tournaments as his bankroll is now considerably bigger. He's looking forward to getting into the High Roller scene and playing more $25,000 tournaments. He has also mentioned, however, that he needs to get back to studying the poker basics to be sure that he's good enough. Humble much? The first thing he did when he won was phone his biggest fan: his mother.

She was crying and had trouble speaking. She's my biggest fan, so it was kind of emotional. 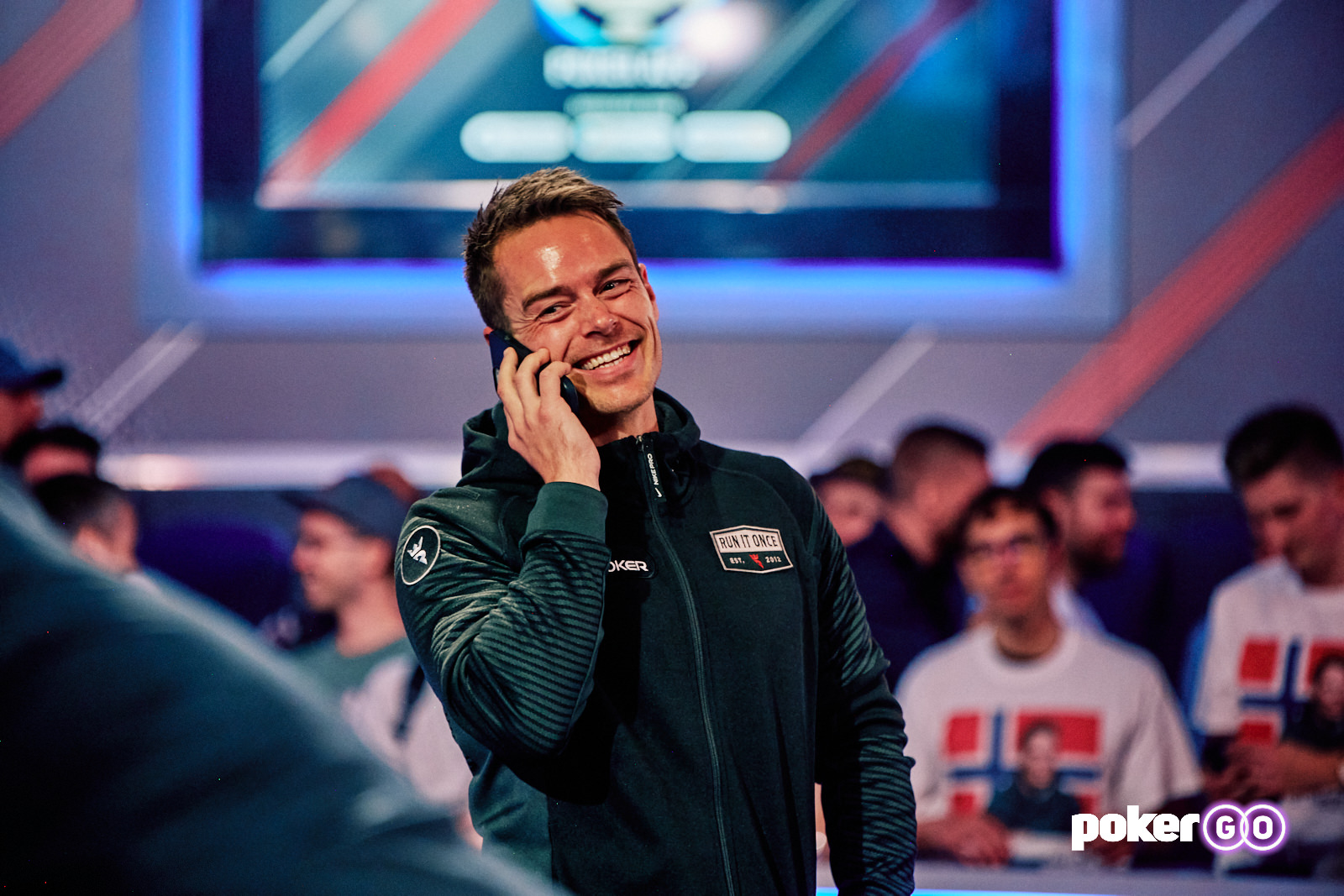 Congratulations to  Espen Jørstad on a very well-deserved win. Keep your eyes peeled for what we can only assume is the first of many wins to come. For more poker content and fun, be sure to check out our PokerDeals Discord, and join our FaceBook group. 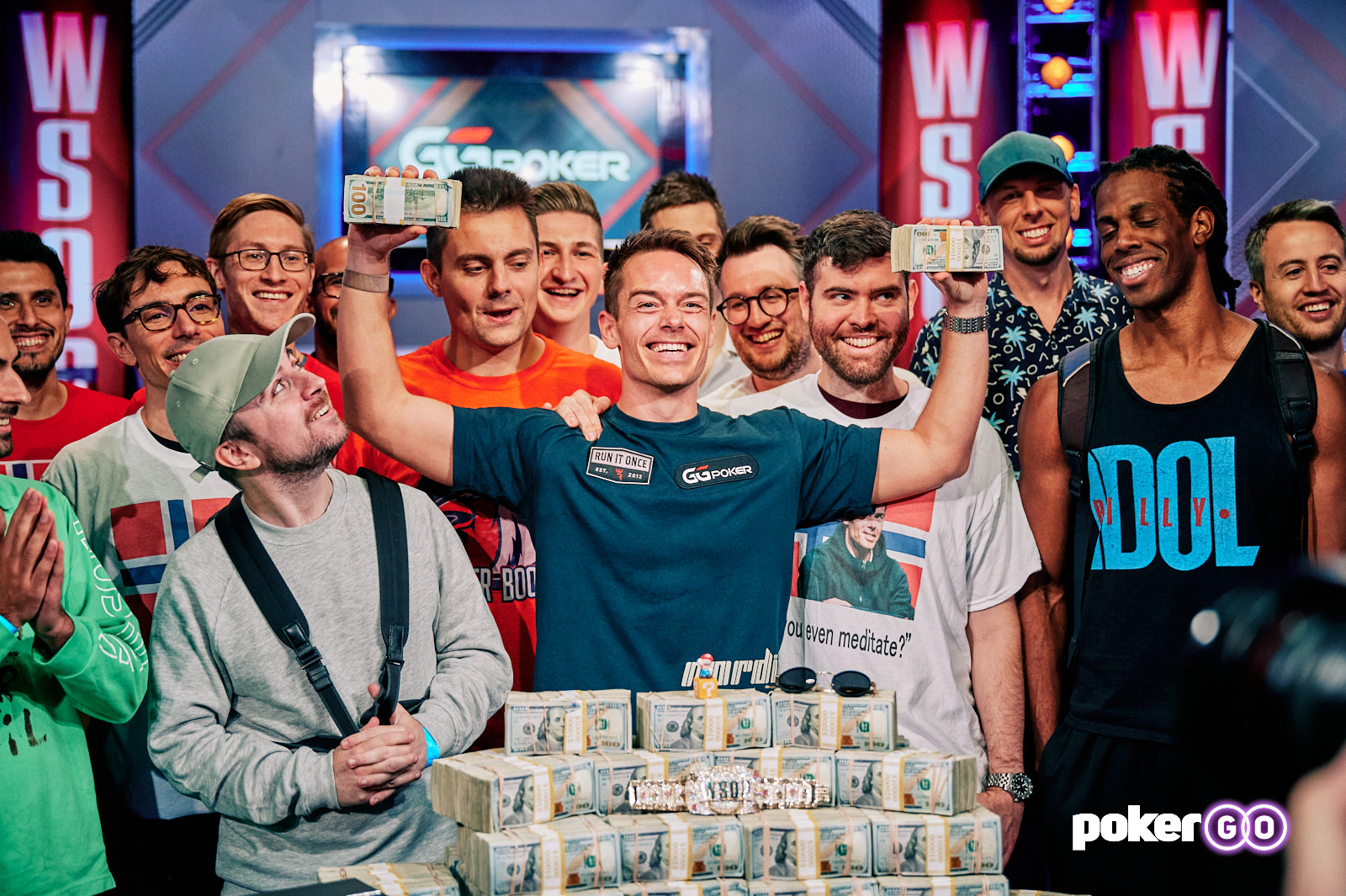 The autumn edition of the Malta Poker Festival ended on a high note with two fantastic players taking home some big prizes. Mirko Mostaccio was crowned the Grand Event winner , walking away with €136,670. In the CasinoCoin High Roller event , Gabriele Re bagged the win taking home €40,000. It was a fantastic tournament from start to finish, making it an event that poker players will definitely put in their calendars going forward. We caught up with the winners and got some insight into what they thought of the tournament, and what we can expect from them in the future. Mirko Mostaccio heads to Vegas The winner of the grand event at the Malta Poker Festival has big plans for his poker career. We had a chat with him to see how he felt after his big win. [PD] What did you like the most about the MPF, besides winning, of course? [MM] Besides the victory, I liked the whole organization of the tournament. Meeting old friends that I haven't seen for ages was also great. [PD] In your opinion what were the main factors that contributed to you winning the event? [MM] Just like in any live tournament, there are many factors that have to be intertwined, certainly a fundamental one was to study a lot before leaving for Malta. Then you put in 14 years of experience and a bit of luck. [PD] What does the win mean to you? How did it feel? [MM] The victory in this live tournament means a lot to me, given that I had always won large sums online but never had I managed to win such a large sum in a live event. [PD] What will you do with the money? [MM] I will certainly use a good part of it to continue playing, the rest I will dedicate to my family. [PD] Are you looking forward to your WPT experience? [MM] Yes, I can't wait! it will be my first time in Vegas, a dream come true. [PD] What's next for you? [MM] The next step is playing the WSOP this summer. Gabriele Re hunts for another trophy The winner of the CasinoCoin high roller event took home a hefty sum, and his first live event trophy. Here are some of his thoughts on his Malta Poker Fest journey. [PD] What did you like the most about the High Roller, besides winning, of course? [GR] If I'm honest, I didn't love the atmosphere of this event because I was late reg, and only started on day 2, but I liked the carelessness of the players. There was not too much stress in the High Roller, and all the players were more friendly. [PD] In your opinion what were the main factors that contributed to you winning the event? [GR] I think to win this tournament, I ran very well. I didn't play many showdowns preflop but the key hand was against YohViral where I check/jammed the river with a bluff (I turned 3rd pair in the bluff), and he called my bluff with the worst hand 🙈 [PD] What does the win mean to you? How did it feel? [GR] This win doesn't change anything in my life or my routine, but it's important because it's my first live win with a trophy 🏆🙃 so I'm really happy to have conquered it! [PD] What will you do with the money? [GR] I will not do anything in particular, just bankroll my poker journey and my life. [PD] What's next for you? [GR] I'm going to Rozvadov to play the Main Event of the WSOPE so I'm hunting for another trophy 💪🏻 Wishing these two amazing players all the best for their upcoming trips, Mirko to Vegas and Gabriel to Czech Republic. We hope to see them walk away with more titles under their belts! From the solid performances and great play, we can only expect great things from these two in the future. Good luck!

Gabriele Re is the CasinoCoin High Roller Winner

In what turned out to be an impressive field of 150 players (with re-entries), the CasinoCoin Cup High Roller finally crowned a winner in the early hours of Tuesday morning. Gabriele Re beat his heads-up opponent Renato Messina to lock up his first prize of €40,000. CasinoCoin High Roller winner, Gabriele Re Final Table at the Malta Poker Festival CasinoCoin High Roller Event The final table of the CasinoCoin High Roller event at the Malta Poker Festival It was a cracker of a final table with some well-known poker faces gracing the table. Johan Guilbert, better known as YoH ViraL is a Malta resident, and no stranger to the final table of big events. Re held it together, though, taking home the grand prize, as well as a trophy for his efforts. The prizes were as follows: Place Name Prize # 1 GABRIELE RE 40,000.00 # 2 RENATO MESSINA 26,000.00 # 3 JOHAN GUILBERT 18,000.00 # 4 KOENMEUTSTEGE 13,000.00 # 5 ANGELO VIETTI 9,100.00 # 6 EDVALDAS SKYRIUS 7,100.00 # 7 THOMAS LANGELAND 5,400.00 # 8 YOSSEF IFERGAN 4,500.00 # 9 CHRISTOPHER CALVERT 4,000.00 Renato Messina: Second Place YoH ViraL: Third Place Casino Coin Bounties Along with the amazing high roller prize money, players also had the opportunity to win 1 million CasinoCoin (CSC). CasinoCoin is a digital currency, developed specifically for the regulated gaming industry. Five players had big red casino coin stickers and carried bounties of 1 million CSC. It added an extra something tasty to the already prestigious tournament, giving players the chance to bag a little extra. All bounty players were eliminated on day one. Well done to all the players who took part in this awesome event. Let's hope the next Malta Poker Festival high roller attracts even more players for even juicier prizes! We'll see you at the tables, until next time.